Wednesday, 6-30-04: After a slight delay we hit the PA turnpike at 1:00 PM.  Stopped for a filling lunch at one the many delightful rest stops.  (That was sarcasm by the way.)  We arrived at Sickman’s Mill Campground at 3:00 PM.  I greeted my Aunt Lisa and her daughters (my cousins) Michele & Brielle.

I removed everything that I didn’t want to get wet: watch, sunglasses, wallet, change, socks, shoes, and car keys.  I placed them in the back of the PT and closed the hatch.  As the hatch slammed shut I had a feeling that I had just locked my keys in the car.  I immediately pulled on the hatch release and was relieved when the door opened.  I shut the door again and walked over to grab my tube and meet Pangelina, Carissa, Brielle, and Michele down by the water’s edge.  Then the tubing adventure began.

I won’t go into too much detail about the tubing adventure, but suffice to say that I’m tubing inept.  As we were drying off and waiting for my Uncle to arrive, a camper returned for a tubing ride and said he lost his keys in the creek.  We had a good laugh for an hour or so trading pot shots at the guy’s expense.  Around 6:00 my Uncle Ron came back and after introductions were made we wanted to hit the mill.  I went to the car and began gathering my stuff.  I put my watch back on and grabbed my wallet and cell.  I checked the service.  Nothing.  (Too much to expect for being in the center of Cow-ville, PA.)  The odd thing was not so much the lack of service, but rather the low battery warning.  I had the cell on charge all-night.  (In fact it had only been off the charge since noon.)  I was about to shut the hatch then remembered the cameras.  While it was still open I thought I should grab the keys.

Now here’s the thing.  I distinctly remember placing the keys next to my wallet, or at least that was my intention.  Well they weren’t there.  I couldn’t find any trace of them.  I checked my pockets.  Nothing.  I reasoned that absent-mindedly I must have stuck them in my pocket and now they were gone.  Lost to the creek.   While Pangelina stared at me dumbfounded for what seemed like an eternity not wanting to believe I could be so stupid, (Hell I think she expected me to at any point end the joke, but I assure you it was no joke.) The rest of the gathered masses helped me tear apart the car in a vein attempt to find them. 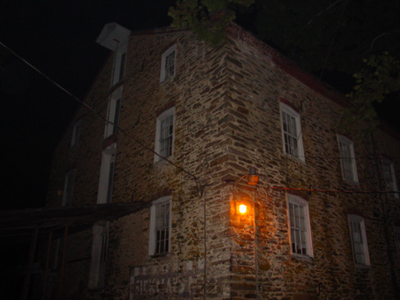 The one benefit so far was the near mid-night Mill tour.  We were able to gather information on the “good” spirits of the mill, and some of the malevolent forces.   Nothing further on BACCARDIO.  There was one room however that made Paranormal Investigator Pangelina Flowers grab onto Carissa, and tell me that she needed to leave the room.  She later told me that she has never felt a presence so cold and evil.  Carissa also told one of the rooms made her very uncomfortable.  I on the other hand felt nothing.  Though at one point I felt tightness in my chest, but at my weight, I write it off as a heart attack.  (A joke…I hope!)  The pictures are cool and some show telltale orbs and such, but no BACCARDIO incidents, weird. 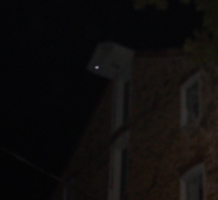 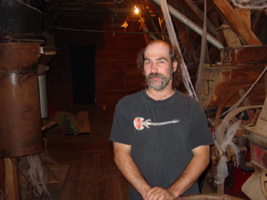 Ok here’s something weird. Look into the mirror. You see the cloudy area on the left? You can almost make out the image of Alfred Hitchcock.

I have no idea what caused this shadow.

We headed back to the house to settle in for the night.  Do you know how hard it is to sleep in damp mildewy shorts?  Yeah it sucks as much as you’d expect! 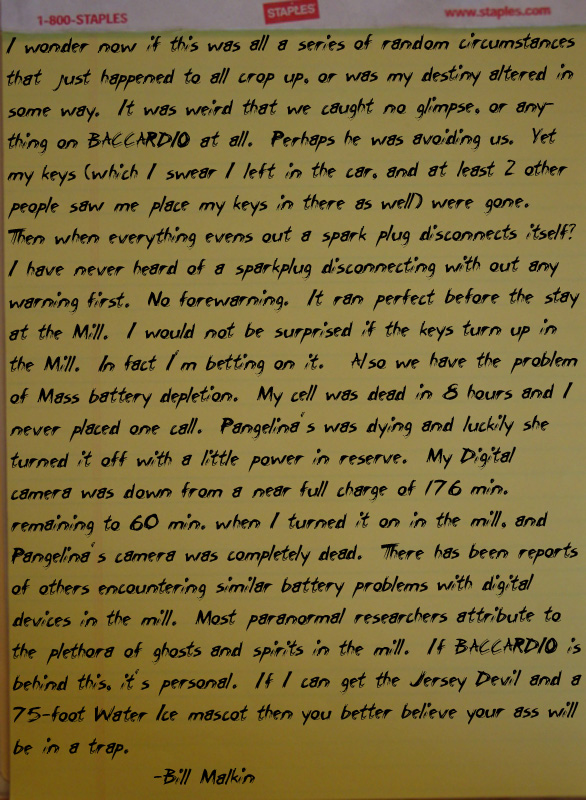