Further Information:  While Rich and I were at the GBNJ: North lab working on improvements to the equipment, we received a call from a distressed women from a second floor apartment around the corner from HQ.  She said she felt like someone or something was watching her, but every time she’d check nothing would be there.  Rich and I sprung into action and raced over to the scene.  Our short investigation brought us face to face with the one-eyed monster. (well he actually had 3 eyes, but one of them over shadowed the other two. -Rich)  It took us a while to capture the slippery little beast. We finally cornered it as it headed under the victim’s bed, but not with out consequence.  Rich took a blast to the face from the little one-eyed bugger.

Rich firing at the one-ey…ahem, at the spectral enitity in question. obviously he missed. -Bill

Bill totally carving in to the next apartment, oh yeah and he blew a chance to trap the ghost. -Rich 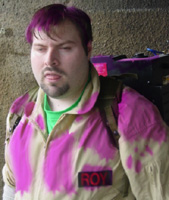 “I feel so funky again.”