We should probably check that out.

Case Notes: First off Ron Malkin is my Uncle, he bought Sickman’s Mill in August of 2002, which is how a New Jersey franchise gets a call in the middle of Pennsylvania.  Ron knew going into this venture that The old grist Mill on his property was one of PA’s 10 most haunted sites.  This was one of the primary reasons for moving.  Ron has always been fascinated by the supernatural.  (guess it runs in the family!)  Lisa and daughter [CONFIDENTIAL] are practicing Wiccans, in fact the entire area is a Wiccan hot spot.

New disturbances include: Threatening messages written in blood, Objects being thrown at them, being pushed down stairs by an unseen force, pressure on chest.

Someone overstayed their welcome.

Primary Evaluation: Tim and I arrived and we immediately began our investigation.  The place was crawling with ghosts.  No idea how many.  They seemed to range from a simple Class I to at least one powerful Class V, none being considered free roaming.  Ron says that the ghosts are normally friendly and most are spirits of past owners, workers, or customers.  He also doesn’t want them all to go, just the troublesome specter.  (He wants to run haunted tours through the Mill; No ghosts…No cash!)  During this preliminary exam we noticed unusually high readings emanating from the giant grist mill gears.  We broke through the stone enclosure and found a skeleton mangled in the gears.  We don’t know at this time how it got there, but it is with out a doubt the cause of the troublesome ghost.

Elimination Process: Tim grabbed the only proton pack we had completed at the time, I grabbed our only trap, and we headed back into the Mill.  We started at the mangled skeleton, locked in the ghosts electro-magnetic discharge signature into the prototype EMDD and followed the trail to the fourth floor of the Mill.  After a few moments we found the ghost.  Tim fired at it and the beam went wide, and almost sliced off the roof support column.  What proceeded next was a frustrating series of events as the ghost led us on a chase around the Mill Scooby-Doo style.  It would disappear into a room or floor and we would follow only to have it come out again into a different room.  After what seemed like an hour we finally cornered the ghost long enough for Tim get his proton stream around it.  We promptly trapped in one of our home made storage containers.

Follow-Up: Both Ron and Lisa were happy with the service and there have been no further (unwanted) incidents.

2/12/03-  Upon further review of the circumstances of this case, I uncovered the following:

It seams the last manager of the mill in 1929, when it was last in operation.  Upset a powerful New Jersey crime boss and he sent his best hit man, the mysterious Mr. Leeds, to deal with the situation.  The body of the manager was never found.  Could the skeleton in the gears be the body of the former manager?  We may never know?

We reopened this case in light of new information.  The ghost of the manager is still gone, but new evidence shows something far larger than a violent Class V.

Last week Ron hired my cousin, Jeff Young, a professional photographer and amateur spiritual photographer (like I said it runs in the family), to produce a brochure for the campground and haunted mill tour.  Most of the pictures came out as expected, (floating orbs, shadows on walls, ect.) except one shot of a darkened stairwell.  There is a clear form of what appears to be some kind of knight.  Jeff stopped by our office and showed Dave and I the picture.  Dave immediately thought the image looked familiar.  We crossed checked the image with Tobin’s Spirit Guide and Magicians, Martyrs, and Madmen, nothing.  Dave then logged on to the occult reference net, there was one match.  The image closely resembles War, one of the FOUR HORSEMEN OF THE APOCALYPSE.  We need further research to determine if this ghost is a harbinger (War in Iraq) or something larger (end of the world).   With in the next few weeks we will be installing remote PKE, EMF, and EMD sensors, so we can keep a constant eye on what is brewing in the mill.  The only question that still remains unanswered is why is this area of PA such a paranormal hot spot?  Is it the soil, or perhaps the Mill itself is a focal point.  Hopefully these new sensors will shed some light on the subject. 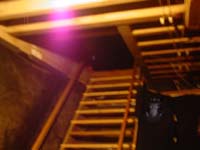 Why they always gotta go up!

Why would there be a knight in PA? 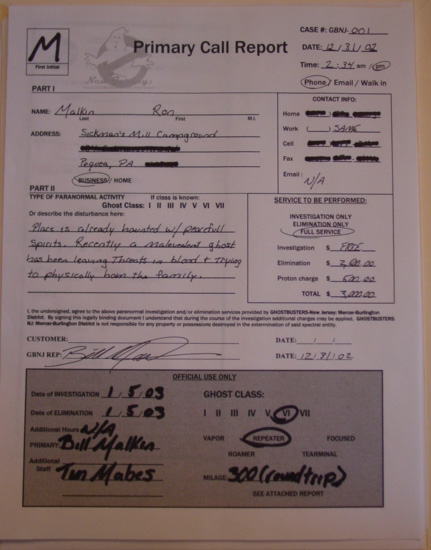 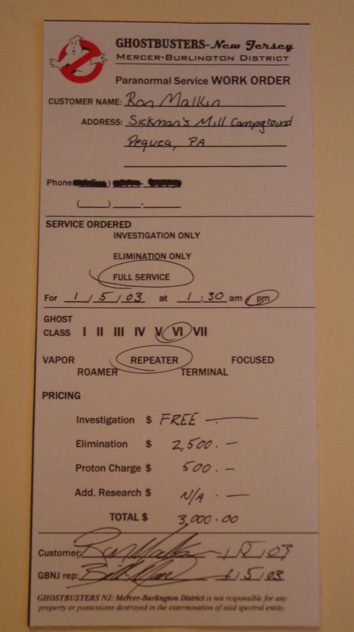