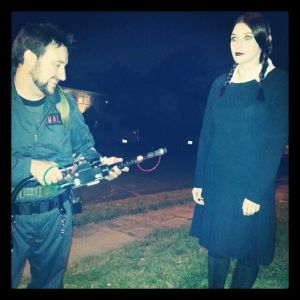 District 2 Coordinator Bill Malkin responded to a call in the Ecto-FJ Cruiser about a “goth” woman walking the streets in a zombie like state. Calls to GBNJ (which we really wanted to dismiss as pranks, it’s that time of the year) also described the mystery woman as “appearing familiar from classic television” and “may have been around either before or after monsters.”

The “very pale” woman wasn’t responsive as people normally are. Her ID associated her with a day of the week. Bill proceeded with caution by unhooking a nutrona wand from his proton pack. The woman continued to stare, seemingly un-phased by Bill’s actions. Because of her perceived state of mind, Bill was able to safely escort the woman to HQ for tests. Fortunately she was cooperative, presuming she was even aware. She’ll stay within the family for an undetermined amount of time.