Note: I originally wrote these reviews for Ghostbusters Inc.

Prior to September 16, I owned just about every copy of Ghostbusters I would have wanted or needed. Before Sony announced a digi-book and individual releases, ghostheads knew about a limited edition Blu-ray gift set. As nice as it could be to have a collectible Slimer/Ghostbusters logo statue, I couldn’t justify spending near or over a $100 USD because of it. As it is Ghostbusters 30th Anniversary, I had to spread the dollar bills for other more collectible merchandise. For $19.99 USD (or less in my case) two Blu-rays and a book came to $7.50 USD each. 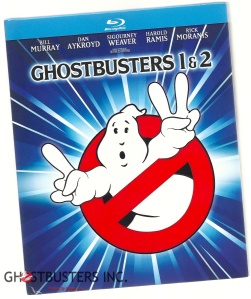 If you’ve ever read my Ghostbusters Media post from Rich Collectibles you already knew it should be a crime to alter an iconic logo. If someone within a creative department really had to represent both Ghostbusters and Ghostbusters II, why not have the “one” finger from the left hand just be the “no ghost” hand while the right hand holds up the “sequel” hand. Is it just me or anyone notice the “no ghost” logo got in shape for the 30th Anniversary? 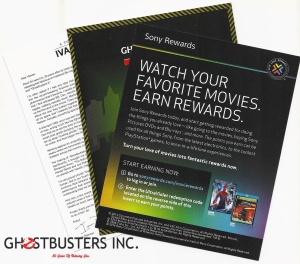 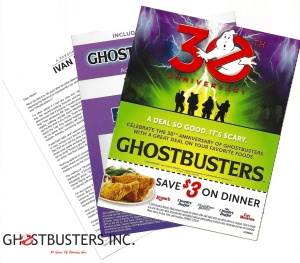 The anniversary Blu-rays come with a personal note from Ivan Reitman, advertising from Sony, their business partners, and a digital code to download digital versions of the movies.

The insert was the first time I heard about Ghostbusters II™ being released on vinyl and CD for the 25th Anniversary. I don’t believe Sony’s Ghostbusters sites have talked about it and I haven’t seen this soundtrack for sale. It’s also the first time I heard about the Ryan’s promotion as I had never heard of them and didn’t even know two of their other chains exist at all in New Jersey. 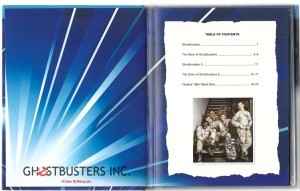 I don’t really know why Sony chose the graphic design for the US version. What is that light suppose to represent, a metaphor? Just looked cool to someone? Or in the context of Ghostbusters, its The Protection Grid lighting up from ghosts getting ready to escape? This “explosion” of light effect was infused into the covers, casing, and the Blu-rays themselves. 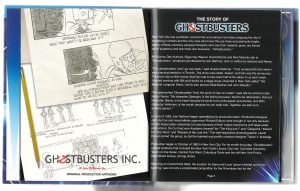 If you’ve ever read Making Ghostbusters (Spook Central link) by Don Shay you already know the concept of Ghostbusters™, when and how it came together, script with notes from the likes of Dan Aykroyd, Ivan Reitman, Harold Ramis, Michael C. Gross, and Joe Medjuck. Whether one owns Making Ghostbusters or not having a glossy companion book makes for a nice addition.

My only nitpick for the book to have been separate or removable like the 2005 “ectoplasm” set. I only own one other digi-book Blu-ray, I had already known that’s how digi-books are put together in sets like these. 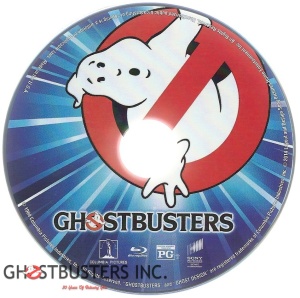 I know Sony has used the Ghostbusters logo in different ways ever since the 15th Anniversary DVD in 1999, uh what happened here? Did the explosion of light force the “no ghost” logo to fall on its side, about to roll away from the Blu-ray? Its obvious a non creative executive deemed this for “acceptable” use. I’m more forgiving about the international “no ghost” logo in the title as most countries have the same or similar Blu-ray art.

For the 30th Anniversary Blu-ray a P.K.E Meter was chosen to load the disc and bring up an all new menu. A ghosthead who goes by the handle ReadyToBelieveYou84 is the menu designer. He created ECTO-1 by the Ghostbusters firehouse with reflections of Peter, Ray, and Egon. Unfortunately he couldn’t include Winston because the material he had to work with was either limited or had aged too much. With the menu awaiting a selection a full version of Ray Parker Jr.’s “Ghostbusters” plays. When the song ends, it starts to play again if you haven’t made a selection yet. I understand why “Ghostbusters” is the song of choice, would have been nice if The Bus Boys “Cleanin’ Up The Town” could have been used as well.

When it comes to the picture quality and sound I don’t usually get hung up on the specs. My Sharp HDTV is kinda a “starter kit” that was once new in April 2009. It’s maximum resolution is 720p. I’m still using the stock speakers that whether its from a TV show, movie, or one of my discs sounds pretty good for what it is. I’m also still using a Sony Blu-ray player from December 2009. Naturally the newer a movie, the better it will look and sound.

If your hardware has the capabilities Ghostbusters™ 30th edition uses a 1080p MPEG-4 encode from the 2013 4K release and the sound is DTS-HD.

Who Ya Gonna Call – A Ghostbusters Retrospective

If you already own the 15th Anniversary edition of Ghostbusters™ from 1999, you may want to have the DVD with you when you’re ready to watch these original DVD features. Originally I thought it could be my set up, the 30th Blu-ray warns us that this video is of a lower quality. Which would be fine, if it wouldn’t be a small size and play in the corner or elsewhere (depending on the feature) without any kind of menu like artwork.

Their are two additional deleted scenes for whatever reason Sony didn’t include for Ghostbusters™ 30th Anniversary:

1. After Peter, Ray, and Egon return to the “University” from the New York Public Library they begin talking about equipment that could catch and contain a ghost. Before they find out from Dean Yeager Peter’s a “poor scientist” and they’re being fired, the guys have a friendly argument about Peter winning a Nobel prize.

The deleted scene was included on the Criterion Collection laserdisc. Paul Rudoff who runs Spook Central put the scene on the interwebs.

2. The second deleted scene would have shown Ray and Winston on a job at Fort Detmerring. After speaking to the park ranger they would have been looking for a ghost. In the theatrical version of Ghostbusters, part of this sequence is included in the montage, let’s just say as part of Ray’s subconscious. 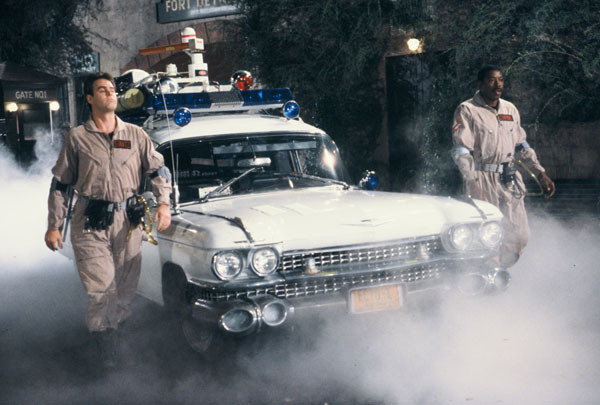 Their are of course other Ghostbusters music videos. Ghostheads don’t know why videos like The Bus Boys “Cleanin’ Up The Town” wasn’t included. It could be argued it’s not as iconic as “Ghostbusters.” It’s played the first time we see the completed Ectomobile and the guys suited up walking into their first ‘bustin job. How about Mick Smiley’s “Magic?”

If you already own the 15th Anniversary DVD and at least one version of the Blu-ray unless you definitely want to own the glossy book and/or new features too or can get the digi-book at a good price you may be better off buying individual releases.