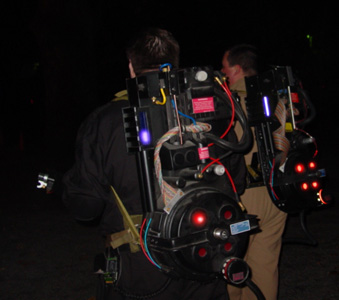 Bill and Rich walk over and give Dale a hearty handshake.

“Glad you could make it, Glycerine.” Rich said as he extended his hand.

“Me too. And call me Dale.” replied Glycerine.

As Bill, Rich, and Dale walk back to the door to the mill, They hear footsteps behind them. They turn to see Mike and Kyle walking toward them holding Super Soakers. Mike has since changed into a charcoal grey flightsuit and is pumping up his repurposed Super Soaker. Kyle is following close behind with the soaker held close to his face. he is whispering sweet nothings to the the slime tank trying to make sure the slime has the best possible positive charge.

“Hey Bill!” Mike called out, “We think we can stop this. Mind if we tag along?”

“Uh how? You said the slime would have no effect.” Bill countered.

“We have an additive. Think of it like STP for mood slime.”

Bill and Rich looked at each other with confused expressions. They shrug and open the door. Much like last time. Bill screams like a girl.

The only thing different this time is Pangelina was not there to scare him. it was the Horsemen of DEATH. Death swings his massive battle axe into the door cleaving it in half. Bill and Rich light up their wands and fire at Death’s axe. They seem to have the axe held in place. 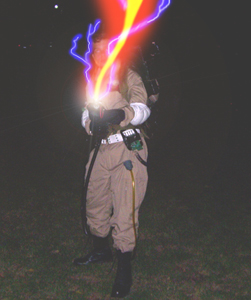 “Wait I have and idea!” Will said aloud. He shuts off his stream and hands his wand to Andy. Andy awkwardly positions his left hand to hit the trigger and begins firing with both throwers. Will reaches down to the holster that a trap would normally be paced in and pulls out his modified Beretta 93F EMP rail gun. Based of of GBNJ’s designs for use as a personal defense weapon. Will had never used the Electromagnetic Pulse ammo clip. He slides the clip from his belt and locks it into place in the handle of the gun.

“Kevin, PULL!” Will shouts to his colleague. Kevin takes his cue and pulls a skeleton away from the crowd and flings him toward the ceiling as he shut off the stream. Will takes aim at the undead warrior and hit it with a three round burst of EMP bullets. The Warrior explodes in a cloud of dust.

Despite the proton streams hold Death’s axe, he is still making significant progress toward the Bill and Rich.

“RUN AWAY!!!” Bill shouts to the partner. They both switch off their guns and run toward the Command Center. Bill ducks behind the ECTO-NJ. His mind is racing, trying to think of a solution. Then it hits him. Bradeon Stone’s sword.

Bill hollers over to Rich, “Keep him occupied for a sec.” Bill then opens the back of the ECTO-NJ and starts rummaging around through the assorted gear. Rich is trying to see what Bill is doing, but then realizes that he’s supposed to be watching Death. Death is getting close to Bill. Rich has to think quick.

“Hey ugly!” Death turns toward Rich, “Yeah you! Wanna go for a ride? Cause I have a ghost trap with yer name on it, pal.” That gave Bill the chance he needed. As he unsheathed the sword Death spun back to Bill. Death swung high, and Bill easily parried. Death tried low, again blocked. Bill smiled. The sword must have some kind of blessed power.

The battle was fast and furious. The metal clanging the sparks flying. back and forth. First Bill would be on the aggressive then Death. After a few minutes of lightning quick fighting the two parted. Bill wiped the sweat from his brow and Death removed his helmet. It was Rob Wurm. Well at least it resembled him. His face was grey his eyes were glassed over.

Mike, Kyle and Dale run up to the third floor bypassing whatever gruesome sights awaited them on the lower levels. They enter the room where the Baccardio’s sarcophagus was enshrined. The large room was used a grain storage area so there was no equipment, just wide open floors. That is where they met their first real challenge. From the accounts they read it was FAMINE that blocked the way to the tomb.

Dale stepped forward, “Stand aside, please. We have important business to attend to.”

“No one gets past me!” countered Famine.

“We’ll just see about that!” Kyle shot back.

“You don’t know when to give up do you?” came a new voice from behind them. They turned to see PESTILENCE standing holding his short sword.

“Uh, there seems to be no end of them and it’s getting kinda dusty in here.” Dr. Andy Harness said while still dual wielding Neutrona wands.

“I noticed. PULL!” Kevin flips another skeleton in the air as Will pops another 3 round into it.

Kevin is picking out the next target as he see War just standing there.

Andy replies, “It’s worth a shot…”

“PULL!” interjects Will. Kevin toss Will another undead clay pigeon. Will promptly turns it into dust.

“I doubt Will has enough ammo to continue anyway.” Andy continued. Will released the clip from the weapon. and checked the number of EMP rails remaining.

“I got three.” Will informed the others.

“Wait, what would happen if we fired a sustained blast at the vortex?” Kevin wondered aloud.

“An EMP is designed to disrupt electromagnetic energy by overloading it.” Will responded. “I dunno what would happen. It could collapse the rift or cause it to implode, and depending of the magnitude of the blast it could suck all of Pennsylvania with it.”

“Ah what the hell I never liked this state anyway!” quipped Andy.

Kevin shouts over to the others, “Let’s do it on three. 1…2…3!” In unison Kevin fires at the Hell Mouth. Andy draws both beams up and together with Kevin’s beam allowing the soldiers to advance toward them.

“As soon as I shoot, cease fire and grab onto something.” Will yelled to the others. Will squeezed the trigger and three rounds fired at the vortex. Andy and Kevin did as instructed and dropped their wands and grabbed onto the door jam from the hallway behind them. The vortex exploded the explosion was sucked back into the rift. Then all went calm.

“That wasn’t so bad!” Commented Andy Harness. Then all at once the rift sucked inward. The dust and remaining skeleton warriors were the first victims of the implosion. They all were sucked back to the closing portal with such a great force that they all slammed into the rift as one mass. The suction didn’t end their. The vortex compressed and compressed and finally the warriors were sucked into it.

The guys were now horizontal from the suction force created. The Horsemen of War having already lost his horse in the suction latched onto the wall. He started making his way over to the Ghostbusters. He reached Andy and grabbed his pack with one hand and drew his sword with the other. He pulled the sword back to get a death blow, but he never got the chance. Andy pulled the safety release on his shoulder strap and the pack and the horsemen were sucked into the vortex. As the Pack was sucked through the pressure weakened the cyclotron and the safeties failed. The pack hummed at an increased frequency and then exploded. The nuclear explosion was enough to effectively stop the imploding vortex and seal the Hell Mouth from this plane.

“Rob!” Bill cried out. “Rob, it’s me, Bill. You must remember.” Rob looked at Bill with his head cocked like a dog trying to understand a human.

“Bill?” Rob seemed to hover over that word. Bill noticed that Rob’s eyes were returning to normal.

Baccardio appeared behind Rob, “I see you’ve met my new apprentice. I’ve made a mistake by allowing you to live this long, and now it’s time to erase that mistake. Attack my young apprentice.”

Rob stood up and walked over to Baccardio’s side. Then he positioned himself directly in front of the Dark Master. “No. I will not. I’m a Ghostbuster! My name is….Rob Wurm!” Rob sucker punches Baccardio in the face. He doubles over in pain then thrusts his hands out at Rob. A force field is thrown back and smashes into his chest. He is thrown back and lands at the foot of Bill. Both he and Rich move to check on Rob when the field hits them. It begins to envelope them.

Form outside of the energy cage, Baccardio walks up to them. “Only now do you understand what you were truly up against.” The cell begins to close in on the three of them.

Mike ducks and rolls out of the way as Kyle and Gly fire their proton guns towards each other. The beams pass by the other’s head and strike one of the Horsemen holding them. The Horsemen begin fighting the streams. Mike realizes he has very little time. He rushes the Sarcophagus and kick open the lid and begins hosing down Baccardio’s surprisingly well preserved remains. To Mike disbelief the corpse screams in agony. The screaming intensifies as the remains turn into what a 900 year old mummy should look like, a leathery ass of bones. Once the transformation is complete the screaming stops. and corpse and tomb stop glowing. 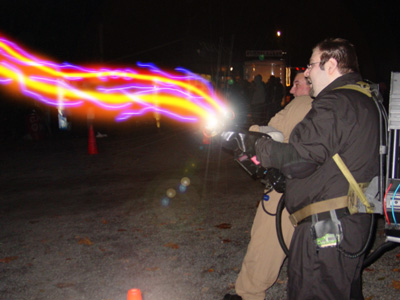 Baccardio doubles over in pain. This time it’s for real.

Baccardio is now writhing on the the ground. Baccardio’s host body begins to smoke. Ron’s eyes open and intense red light begins to pour from the irises. The hovering image of Baccardio is above them. still writhing. Bill and Rich waste no time and fire their proton streams. Baccardio regains composure and fights the streams. He breaks free. Bill and Rich fire, but they miss. Baccardio draws a flaming circle in the sky the disappears into it. The portal seals and Baccardio is gone. Bill rushes over to his Uncle Ron. He wakes up and looks confused and shakes his head.

“Are you alright?” Bill asks.

“I think so. Do you have your keys?” Responds Ron.

Beta team catches up to the rest of the group.

Will asks the obvious, “What happened?”

Mike, Kyle and Gly exit the Mill. Everyone gathers around to discuss the events. Dr. Ray Stantz is the first to ask.

“Vapor rub? How did you know that would neutralize the PKE coming from the Sarcophagus?”

Mike’s face becomes very stoic. “Doesn’t everybody know that only Vicks will stop the coffin?”